A New England Nanny was started in 1991 by Guy Maddalone, a leading expert in the household employment industry.

Growing up in the Capital Region during the mid-1980s, Guy was the oldest son of a large, middle-class family and, as a high school student, he delivered newspapers and did other odd jobs in his neighborhood. His mother, Joyce, was a registered nurse and worked home care as a night duty nurse. When an elderly neighbor on Guy’s paper route asked him if Joyce could take care of his wife so she could leave the hospital, Guy introduced the two of them. Two weeks later another customer on his route asked him for Joyce’s nursing services. She couldn’t take the job, but Guy referred them to her friend who was a home health aide. This led to the start of Guy’s and Joyce’s home health care referral registry.

While attending Siena College to study accounting, he continued to run the agency business. Guy also studied the needs of his clients in the greater Albany, New York area. He met many people who juggled caring for their own families while attending to the needs of their ailing parents. To help these families, Guy founded A New England Nanny in 1991, which focused on child care, housekeeping, and companion care for seniors.

Guy also saw a demand for a service to help families pay nannies and senior care workers legally. In response, he started GTM Payroll Services, the first in the industry to provide payroll and tax administration for families nationwide that employed household help. The service started slowly at first by serving just the A New England Nanny clientele. However, after a few highly publicized nanny tax evasion stories and an IRS tax code change, the business began to flourish by serving families coast to coast.

After a long startup period of six years, the agency started to grow and Guy’s involvement was no longer limited to performing all the pertinent matters of the business. After starting a family with his wife Diane, he became a client, using nannies to help care for his three children. Guy got involved with the International Nanny Association (INA) and the Association of Premier Nanny Agencies (APNA), serving on their Boards of Directors.

As A New England Nanny continued to expand, Guy hired Melissa Schoonmaker, who was a temporary nanny while finishing her studies in Human Services at Hudson Valley Community College. She soon became a permanent office staff member, initially overseeing the temporary on-call division. Later Melissa took over the permanent placement division. In 2005, she was named agency director and has now been with A New England Nanny for more than 25 years.

In 2016, Taffeta (Fee) Murray joined the agency as a temporary services caregiver. In 2018, she was made the agency’s recruiting specialist.

During this journey, Guy wrote two books on household employment: How to Hire a Nanny, now in its third edition, and How to Hire a Caregiver for Your Senior. His goal was to debunk the many myths and misperceptions for families on hiring, wages, labor regulations, and tax obligations as well as recommend good human resources practices while employing the most important person they will ever hire in the privacy of their own homes. Today, there are more than 10,000 copies in circulation to help professionalize the household employment industry.

Our agency started with the same goal we have now: creating ecstatic clients through integrity, and caring about our clients, employees, and caregivers. That’s how Joyce and Guy treated their nursing patients and their families, and we continue to hold our agency staff to the same standards today.

CALL US TODAY FOR A NANNY TONIGHT! 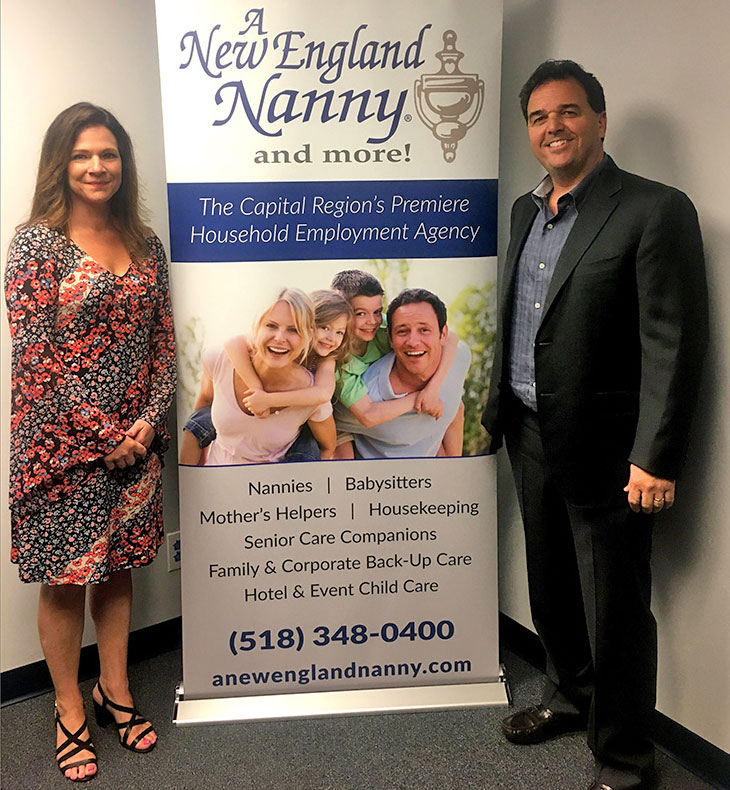 Book an online appointment to talk with one of our staff members about your needs.