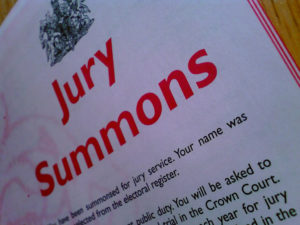 Household employers should be aware and well-informed of the more often-used leave laws like sick leave or Family Medical Leave, but other leave laws will arise. Employers are typically mandated to provide time off for civic duties like voting, witness leave, and jury duty, but state laws specify how much time can be allowed, payment requirements, and how much notice needs to be provided.

Almost every state prohibits employees from being terminating or disciplined for serving on a jury or missing work for jury duty.  Some states even make it illegal for employers to discourage or intimidate an employee from serving on a jury.

Many nannies may wonder if they will be paid while reporting for and/or serving on a jury. In New York, employers are not required to pay an employee’s full daily wage while the employee is reporting to serve as a juror. The State will pay the $40 jury fee of jurors who work for employers of 10 or fewer employees if the jurors are not paid at least the jury fee by their employers. After three days, the State pays the jury fee to jurors who are not paid at least the jury fee. For jurors who are paid a daily wage that is less than the jury fee, the State makes up the difference.

As with jury duty leave, most states prohibit employers from taking actions like disciplining or firing an employee who takes time off work to vote. Some states require employers to allow a certain number of hours of time off so an employee can vote. And some states also require payment to employees for voting leave.

In New York, employees who do not have four consecutive non-working hours between the polls opening and closing, or who do not have “sufficient” non-working time to vote, are entitled to receive up to two hours paid leave to vote. For example, if your nanny does not have at least a 4-hour break during the time polls are open (usually from 7am-8pm), or cannot make it to the polls before or after their shift, then you must provide up to two hours of paid time off so they can vote. So if your nanny works from 8am-6pm on an election day, as long as they can vote either before or after their shift, you are not required to pay for voting leave. But if circumstances prevent the nanny from voting before 8am or after 6pm, then you must allow up to two hours of paid time off during their shift so they can vote.

When a nanny will not be able to vote before or after their shift, they must submit their request for time off between two and ten days before Election Day. The employer may decide whether the leave is to be taken at the beginning or end of an employee’s shift.

Household employers should outline their jury duty and voting leave policies in the employee handbook; the policies should specify if the employer will compensate their nanny or other employee for jury duty, and what arrangements should be made with regard to time off for voting.