Picky Eaters and the Green Eggs and Ham Moment 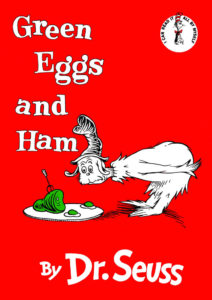 If you have kids (or “nanny kids”), chances are you’ve read them the Dr. Seuss classic Green Eggs and Ham at least once or 18 times. When my now-10-year-old son was much younger, he was very picky about what he ate, and getting him to even try something new was a struggle that often wasn’t worth having.

One time I was discussing the moral of Green Eggs and Ham with him at dinner, because through his facial gesticulation he suggested the chicken I made for dinner that night was not up to his standard of quality. I told him I was sorry he didn’t like it (and to be honest I wasn’t thrilled with it either…a new recipe that was not a winner), but that I was very happy that he at least tried it. We talked about how it’s ok if he doesn’t like something, as long as he tries it. He somehow implied that he wouldn’t like anything that he had to be convinced to try, which is when the Seuss story came up.

“Remember when the guy kept saying he didn’t like green eggs and ham?”

“And then Sam finally gets him to try them?”

So it seemed, at least at the time, that he got the point of the story – it may have been the first time he’d connected a story’s message to a real-life experience.

I started thinking about my own “Green Eggs and Ham moment” – when you try something that you expect to dislike, and you end up loving it. The one that comes up in recent memory for me is fish (not shellfish – I’ve always liked that). I grew up having a variety of fish once a week – salmon, shark, turbot, orange roughy…and I never cared for any of it. Once I left home for college, I never ate fish at all. But a few years ago, my wife and I were out to dinner with my parents – the same parents who turned me off fish as a young boy. We were at a local restaurant and they ordered a sea bass dish. I summoned up some courage and asked myself, “What would I tell my son to do here?” So I decided to try it. And in my son’s words, “I LIKED it!!” I did like green eggs and…I mean, sea bass! Since then, I now eat fish about once a week.

My son is still not a great eater in terms of variety. But he usually is willing to at least try anything we ask him to, and I credit Green Eggs and Ham with some of that, planting the seed of encouragement at an early age. Ironically, I have made green eggs and ham for dinner a few times, and it didn’t go over well. But that may be more of a reflection on my cooking and the rather unappetizing look of eggs and ham colored with green food coloring.

How do you get your kids to try new things? Please tell us about your “Green Eggs and Ham moments!”