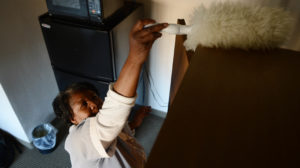 While household employees are often excluded from federal and state laws protecting against wage theft and overtime pay because of the limited number of employees within the home/ business, the crime of wage theft crimes and household employers are not mutually exclusive. A growing number of states are addressing the wage theft by some employers—employers who pay workers below minimum wage or do not pay overtime, resulting in overworked, underpaid employees. Many (but not all) of these employees tend to be immigrants who come to the United States desperate for any work, and who therefore accept what is on offer—even if the job entails an infringement of worker’s rights and federal and state law.

According to a 2013 briefing report, “Low Wages and Scant Benefits Leave Many In-home Workers Unable to Make Ends Meet”, by Heidi Shierholz, in-home workers, such as nannies, housekeepers, and senior care workers, often receive such low wages that they are living below twice the poverty threshold. While the household employer must ensure his or her employee receives at least the minimum wage and other protections such as overtime pay, meal breaks, etc., domestic worker organizations are calling for action at the federal and state level as many employers are in violation of this.

According to the report, in-home work is expected to grow 53.2 percent, compared with 14.3 percent for other occupations. All federal and state laws and efforts to protect domestic workers will add to the occupation’s growth. Some states, including New York, have enacted Domestic Workers’ Bill of Rights laws that help with this protection.

The 2012 report, “Home Economics: The Invisible and Unregulated World of Domestic Work”, also documents “serious and widespread” mistreatment of domestic workers in the United States. Generally domestic workers, said the report, “are underpaid, in many cases less than the minimum wage, and often at levels too low to adequately care for their own families…Employed in private homes, behind closed doors, domestic workers endure long hours and substandard pay. There is little economic mobility and almost no financial security…”

A number of states protect workers with wage theft prevention laws, including New York, California, and Washington, D.C. Wage theft prevention laws mandate that employers provide workers with written, detailed information on how much and when a worker is paid. These employer pay notices must generally be provided upon hire and when there is a change to the information provided. Employers not following laws and regulations could find themselves facing penalties and even jail time.